Prolonged periods of fasting–particularly in conjunction with other ascetic methods—have a long history of being used as a means of creating altered states of consciousness. Roger Walsh and Frances Vaughan (1993) explained the transpersonal aspect of this experience as follows: “Transpersonal experiences occur in altered states of consciousness, and the study of both has made clear just how dramatically we have underestimated the plasticity of human consciousness and its range of potential states . . . The range of techniques for inducing these states is vast and includes both ancient and modern methods. Some time-honored methods are physiological strategies such as fasting, sleep deprivation, and exposure to heat and cold; others are psychological methods such as solitude, chanting, drumming, dance, meditation, and yoga” (p. 9).

Vaughan (2005) later expanded her perspective on the manner in which a spiritual practice can affect consciousness: “When the ego that is subject to physical laws dissolves into an identification with soul, it enters the timeless imaginal realms that are perceived as other worlds or alternative realities. These may be accessed by a variety of consciousness-altering techniques such as meditation, shamanic journeys, holotropic breathing, fasting, solitude and contemplation” (p. 106).

According to Sufi scholar Kabir Helminski (1992), “Through control of the breath, fasting, and sustained awareness it becomes possible to separate from our coarser bodies and to mount the steed of pure consciousness” (p. 118). In this manner, fasting empties the body and clears the mind, sharpening intuition and other transpersonal ways of knowing. Speaking to this point, William Blake (1996/1893) said, “If the doors of perception were cleansed everything would appear to man as it is, infinite” (p. 154). Transpersonal theoreticians claim that a psychic cleansing occurs while fasting through a process of purification (Grof & Grof, 1989; Sperry, 2001). In this way, fasting becomes an effective method for integrating lower unconsciousness and higher consciousness through somatic experience, all primary concerns of transpersonal psychology.

Fasting has a therapeutic effect on a type of consciousness known as liminality, which is a transitional period or phase. During liminality, the participant lacks social status and suspends their state of being (Peters, 1975). When fasting, the participant experiences consciousness in a transitional state that correlates with a suspension of everyday activities and social conventions. Anthropologist and psychologist Larry G. Peters (1975) explained this phenomenon, “Altered states of consciousness are often induced here, for example though fasting, psychedelic ingestion, continual dancing, or sensory deprivation” (p. 209). During liminality, fasting has the potential to facilitate change by causing a paradigm shift in beliefs and values. Aaron Beck, the founder of cognitive behavioral theory, said that changing these underlying belief systems in a positive manner is critical in relieving the symptoms of certain psychiatric problems, such as depression (Abela & D’Allesandro, 2002). 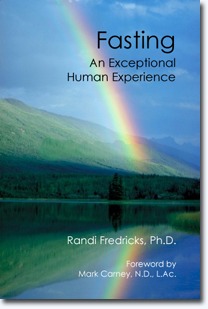